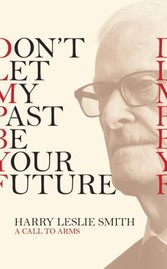 Don't Let My Past Be Your Future

Don't Let My Past Be Your Future

'Harry Leslie Smith is a vital and powerful voice speaking across generations about the struggle for a just society' Jeremy CorbynTHIS A CALL TO ARMS FOR THE MANY, NOT THE FEW: DON'T LET THE PAST BECOME OUR FUTURE Harry Leslie Smith is a great British stalwart. A survivor of the Great Depression, a Second World War veteran, a lifelong Labour supporter and a proud Yorkshire man, Harry's life has straddled two centuries. As a young man, he witnessed a country in crisis with no healthcare, no relief for the poor, and a huge economic gulf between the North and South. Now in his nineties, Harry wanders through the streets of his youth and wonders whether anything has actually changed.Britain is at its most dangerous juncture since Harry's youth - the NHS and social housing are in crisis, whilst Brexit and an unpopular government continue to divide the country - but there is hope. Just as Clement Attlee provided hope in 1945, Labour's triumphant comeback of June 2017 is a beacon of light in this season of discontent. Britain has overcome adversity before and will do so again - a new nation will be forged from the ashes of grave injustice.Moving and passionate, Don't Let My Past be Your Future interweaves memoir and polemic in a call to arms. Above all, this book is a homage to the boundless grace and resilience of the human spirit.